Start a Wiki
Ziggy is the kwami who is connected to the Goat Miraculous. With her power, Ziggy's wearer can use the Miraculous to transform into a goat-themed superhero. She is currently dormant in her Miraculous in Master Wang Fu's Miracle Box, as seen in "Sapotis".

Ziggy is kind and helpful. Ziggy is very sensitive and gets upset when someone asks something from her without saying please. 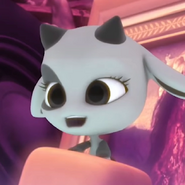 Add a photo to this gallery
Retrieved from "https://all-female-characters.fandom.com/wiki/Ziggy?oldid=5335"
Community content is available under CC-BY-SA unless otherwise noted.