Verity Queen is the akumatized form of Sabine Cheng.

Not much is known about her personality, since her transformation has not been completed in her akumatization of the episode "Ladybug" of season three, but it is possible that both Sabine and Marinette both in the future or in the coming seasons will be akumatized again. But because by its name Verity Queen is shown to force others to tell the truth, just like her daughter Princess Justice, they both want to make Lila know the whole truth if Marinette is responsible for a "supposed fox necklace" but Verity Queen is shown to have a vengeful and bad personality, just as most Akumatized villains are when they take revenge on the person who caused their akumatization, so it's possible that Verity Queen's personality wants to get revenge on Lila to make her confess the whole truth (which is the power of both her and Princess Justice), even though her akumatization has not been completed. 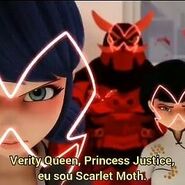 Add a photo to this gallery
Retrieved from "https://all-female-characters.fandom.com/wiki/Verity_Queen?oldid=5338"
Community content is available under CC-BY-SA unless otherwise noted.