Start a Wiki
Tomoe Tsurugi is a world champion in fencing and the mother of Kagami Tsurugi.

Tomoe seems to be a very strict and kept person who is very aware of her environment. She can be wise and informative towards others as well, advising the less open-minded Gabriel Agreste to not give into fear in "Backwarder".

When she mentions Gabriel being more blind than she is, Tomoe doesn't always believe in friendship as she believes forging bonds with another can end sour or disappointing, but she was willing to change her ways in letting Kagami make a new friend. 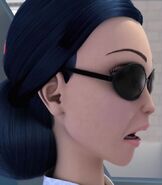 Add a photo to this gallery
Retrieved from "https://all-female-characters.fandom.com/wiki/Tomoe_Tsurugi?oldid=5298"
Community content is available under CC-BY-SA unless otherwise noted.