Sunset Shimmer (also known as Sci-Twi) is a recurring and main character in Alternate Universe. She is the seventh and final member of Mane Wonder and is a former Crystal Prep student (in the original version, she is a student at Canterlot High), she is the Twilight Sparkle / Sci-Twi of the alternate universe version. She has a evil-ago named Solar Eclipse. In Equestria Girls New Generation, Sunset has five daughters: Glimmer Sunlight, Shine Sunny, Sunny Sunset, Shimmer Flare and Starsun.

Sunset Shimmer proves to be smart and shy at first, she tries to make an effort to be kind to other Crystal Prep students, but fails because of her clumsy way. She is highly intelligent, insecure, but she is a good person but she lets herself be manipulated by the Shadowbolts and any Crystal Prep student. Still in the alternate universe, she turns into Solar Eclipse, as a result of pressure from her colleagues, when they think Canterlot High is cheating, she turns into Solar Eclipse, a power-hungry demon obsessed with magic whose goal is opening Equestria portals to merge with Canterlot's, upon turning back, Sunset Shimmer repents and apologizes for all the destruction she caused while she was Solar Eclipse. She joined Canterlot High to make new friends and get away from the bad influence of the Shadowbolts, who did not move a finger to save both schools, now Sunset is a member of Mane Wonder and is friends with Sci-Twi, Sunny Flare, Sugarcoat , Indigo Zap, Lemon Zest and Sour Sweet and is well received and accepted by her new friends.

In the fanon series, Sunset is now the mother of 5 daughters, remains intelligent, the same as her personality from the alternative universe, but Sunset Shimmer, in this version has the ability to solve puzzles, solutions and mysteries, as well as investigations if anything is disappeared, thus making her an intelligent detective. 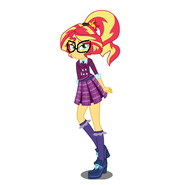 Sunset/Sci-Set in Legend of Everfree. 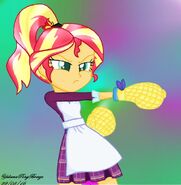 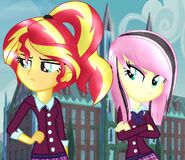 Add a photo to this gallery
Retrieved from "https://all-female-characters.fandom.com/wiki/Sunset_Shimmer_(Alternate_Universe)?oldid=5160"
Community content is available under CC-BY-SA unless otherwise noted.