Sunny Flare is a female human and a student from Crystal Prep Academy. She is a member of Shadowbolts and who appears in Equestria Girls: Friendship Games, as secondary antagonist, in Dance Magic, she and Shadowbolts (Lemon Zest, Sour Sweet and Sugarcoat) appears to main antagonists turned supporting protagonists. Sunny has three daughters in Equestria Girls New Generations: Sun Breaker, Sole Sunny and Dazzle Flare.

Sunny Flare is portrayed as being the most poised of her teammates, sharing some of Rarity's elegant and self-confident mannerisms, but with a more arrogant, rude, and aloof demeanor. She also shares her school's competitive streak, poor sportsmanship, and willingness to manipulate others to achieve their goals. Later on, she reveals a more conscionable side to herself when she accosts Principal Cinch for running away after her actions put both schools in danger, and later when she joins her team in rescuing Canterlot High's students.

Sunny is now a mother to three daughters, she is now more generous and fashionable than ever. Although, she has a rivalry with Sole Sunny, who has her aloof and competitive demeanor from when she was a villain in the Friendship Games. She usually gets along with Sun Breaker who is the nice one of the daughters. Dazzle Flare once had her competitive demeanor until it changed, thanks to Sun Breaker. Sunny loves her daughters so much and tries to get Sole Sunny to the good side. 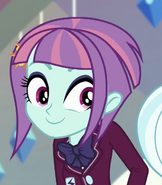 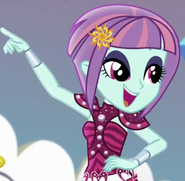 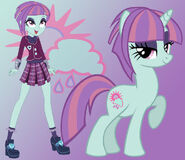 Add a photo to this gallery
Retrieved from "https://all-female-characters.fandom.com/wiki/Sunny_Flare?oldid=6020"
Community content is available under CC-BY-SA unless otherwise noted.