Sugarcoat is a female human and a student from Crystal Prep Academy. She is a member of Shadowbolts, she is also one of secondary antagonists in Friendship Games, in Dance Magic she is one of main antagonists (along with Sunny Flare, Sour Sweet and Lemon Zest) turned supporting protagonists. Sugarcoat in Equestria Girls: New Generation, have a two daughters: Pineapple Colder and Eletta Concetta.

Sugarcoat displays an overly blunt, cynical attitude towards others, Twilight Sparkle in particular, pointing out their faults without hesitation. This notably contrasts with her name, which means to make something sound more pleasant than it is. Like most of her schoolmates, Sugarcoat is highly competitive, arrogant, and a poor sport. She is also willing to go to any means necessary to level the playing field, such as pressuring Twilight into using magic to their school's advantage when they suspect Canterlot High School of doing the same. However, she shows a more compassionate side when she comes to her rivals' rescue after her team's actions end up putting both schools in danger.

In Dance Magic, she still remains blunt in her opinions, but under a more honest mindset since Dean Cadance succeeded Cinch as CPA principal. When the Shadowbolts and Rainbooms unite to benefit both their causes, Rarity and Sour Sweet begin to argue over what should be rehearsed first, but Sugarcoat gives them an annoyed glance that gets them to abruptly stop since it didn't matter, as long as they worked together as friends, rather than rivals like back at the Friendship Games.

In Equestria Girls New Generation: Sugarcoat is very disciplined in relation to her daughters and cares a lot about them, and tends to be nervous and irritated with them, if one or both of them are ready, but Sugarcoat cares about her daughters, especially Eletta Concetta, daughter in which she has a great and excellent mother-daughter relationship. 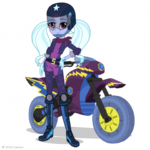 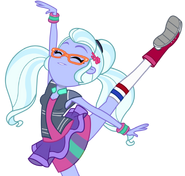 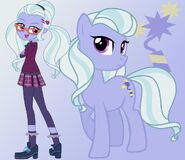 Add a photo to this gallery
Retrieved from "https://all-female-characters.fandom.com/wiki/Sugarcoat?oldid=5165"
Community content is available under CC-BY-SA unless otherwise noted.