Sour Sweet in this version is calm, compassionate, kind, gentle and loving, unlike her original counterpart who was arrogant, competitive and bad, pressing Twilight Sparkle, along with her colleagues to force Twi to unleash the magic. However in Alternative Universe, Sour Sweet looks like the personality of her pony counterpart, except that she is bitter and sour, which in this version her sour features have completely disappeared, leaving only her friendly, gentle and very peaceful features. She has a deep love for animals and her opposite version is Fluttershy, who in this universe is villainous and competitive and bad. Sour is also afraid of Fluttershy, because she is a tough girl and can be very cowardly when she can't fight back Fluttershy's threats or insults towards her or her friends. Sour is a friend who is willing to help and encourage others to be kind, even to Fluttershy (in this universe), trying to make her no longer bad. 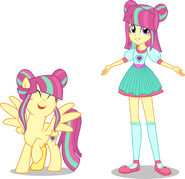 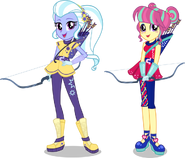 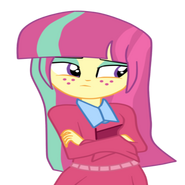 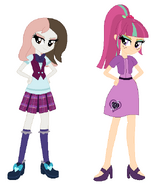 Sour Sweet in Legend of Everfree. 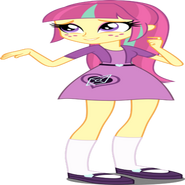 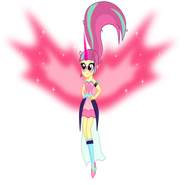 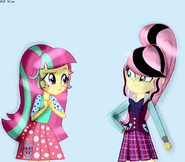 Add a photo to this gallery
Retrieved from "https://all-female-characters.fandom.com/wiki/Sour_Sweet_(Alternative_Universe)?oldid=6122"
Community content is available under CC-BY-SA unless otherwise noted.