Sour Sweet is a female human and a student from Crystal Prep Academy and member of Shadowbolts, a supporting character in Equestria Girls: Friendship Games (originally and initially as secondary antagonist, with Indigo Zap, Sunny Flare, Sci-Twi, Lemon Zest and Sugarcoat and one of major/main antagonists in Dance Magic, who later she and shadowbolts turned supporting protagonists). Sour Sweet in Equestria Girls: New Generations, have a two daughters named, Lala Sweetie, the good one and Icy Sour, the evil one.

True to her name, Sour Sweet has a bipolar personality where she alternates between being sarcastic and rude and obnoxiously nice. She acts mean towards Twilight throughout Friendship Games, irritated by her thoughtless and clumsy behavior, which she believes will cost her team's victory in the games. Much like the rest of her school, Sour Sweet is highly competitive and confident in her athletic skill, and she is willing to use peer pressure against Twilight to manipulate her into using magic for Crystal Prep's benefit. After this ends up endangering both schools, Sour Sweet becomes remorseful and helps rescue her classmates alongside Canterlot High students.

By the events of Dance Magic, she still shows some signs of her bipolar personality around Rarity, but by the end of the special, she manages to show better control of it as her initial competitive spirit under Principal Cinch fades as the Shadowbolts and Rainbooms become better friends, especially with Crystal Prep now under Dean Cadance's kinder authority as the new principal.

In Equestria Girls New Generation, Sour Sweet is now a mother and is a kind and pleasant loving mother who only cares about the well-being of her daughters, and she is also kinder, although sometimes her competitive side rarely appears, but she always advises her daughters mainly Icy Sour to be less competitive in games and learn to see games as fun. In addition to Icy Sour, she has another daughter Lala Sweetie, in whom she always gives reason. 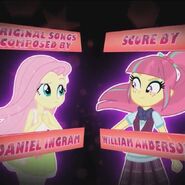 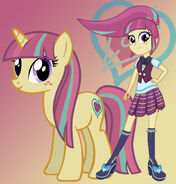 Add a photo to this gallery
Retrieved from "https://all-female-characters.fandom.com/wiki/Sour_Sweet?oldid=4647"
Community content is available under CC-BY-SA unless otherwise noted.