Like her pony counterpart, human Twilight is well-spoken and highly intelligent. She holds a great interest in knowledge and science, being able to assemble intricate scientific devices and solve complex mathematical equations, and her intellect rivals that of Sunset Shimmer. She is a bit of a wallflower, acting very awkward and timid around others, especially the standoffish students of Crystal Prep. Despite her problems in socializing, Twilight is eager to connect with people on a personal level, demonstrated in her interactions with Fluttershy, when the two share their love for their pets, and Pinkie Pie, at the Crystal Prep welcoming party. Twilight is shown increasingly distressed by the apparent harm caused by her magic-sensing and storage device to the point where Sunset's eventual accusations leave her distraught.

Twilight lacks self-confidence when under extreme external (especially social) pressures. During the archery competition in the Tri-Event Relay in the Friendship Games, she is so affected by performance anxiety and Sour Sweet's anger at her poor aim that she begins to cry and her legs threaten to collapse under h

When transformed into Midnight Sparkle, Twilight becomes selfish and malicious, consumed with desire to learn everything about magic even at the cost of her entire world.

In Legend of Everfree, Twilight is depicted as more self-assured than in Friendship Games, interacting with friends and classmates more openly after transferring schools. However, she is still somewhat socially awkward, and she exhibits an intense fear of her Midnight Sparkle alter ego. Her fears do not seem to be completely unfounded, as Midnight Sparkle does appear to attempt to control her when she attempts to embrace her magic.

In Movie Magic, Twilight applies her intellect in an investigative setting by solving a missing-objects mystery on the set of the Daring Do movie. As demonstrated in the Summertime Shorts Mad Twience and Subs Rock, she can sometimes get carried away in her science experiments and pursuit of knowledge.

Sci-Twi in Equestria Girls: New Generation, prides herself on being a loving mother who cares about her daughters, although she always has a terrible relationship with Pinky Slinky because of this feeling of jealousy and love that Sci-Twi gives to Sugar Coffee, your youngest daughter. She also tries to make Pinky stop being mean, but Pinky is rebellious and wants to be different from Sci-Twi and Sugar. 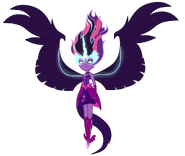 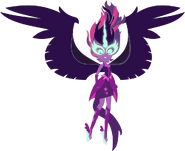 Sci-Twi in her Crystal Form Transformation.

Sci-Twi in Legend of Everfree. 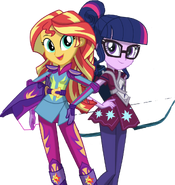 Sci-Twi School Spirit.
Add a photo to this gallery
Retrieved from "https://all-female-characters.fandom.com/wiki/Sci-Twi?oldid=5026"
Community content is available under CC-BY-SA unless otherwise noted.