Start a Wiki
Sapotis is the twin akumatized villainesses of Ella and Etta Césaire.

As Sapotis, their mischief increases, happily breaking rules and causing mayhem across Paris. They enjoy eating, and they don't care for others' safety as long as their own selfish desires are being met. However, because of their obsession with fun, they easily fall for Rena Rouge's illusion of an amusement park, ignoring Hawk Moth's warning that it is a trap.

They also tend to growl, which is especially noticable while they growl "Miraculous" while ganging up on Ladybug and Cat Noir. 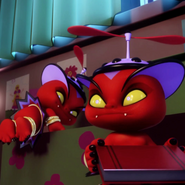 Add a photo to this gallery
Retrieved from "https://all-female-characters.fandom.com/wiki/Sapotis?oldid=5516"
Community content is available under CC-BY-SA unless otherwise noted.