Sabine Cheng is a highly upheld merchant and the co-owner of Tom & Sabine Boulangerie Patisserie.[1][4] She is the wife of Tom Dupain and the mother of Marinette.

Sabine is a gentle, kind and loving woman to her family and the people around her. However, she is a good responsible parent who will discuss issues with her daughter and give punishments like grounding her at the worst. Sometimes, Sabine is a bit nosy and over-involved, usually when it comes to Marinette with her crushes. She still keeps to her boundaries though, and she wants the best for everyone.

For the bakery, Sabine is warm and professional, often treating others respectfully. With great concern and compassion toward others, she helps those in need with selflessness, from people she doesn't know well like Lê Chiến Kim in "Animan" to people she knows personally like Marinette and Adrien Agreste.

In "Weredad", she isn't as hasty as Tom when he believed Marinette was in "love" with Cat Noir aware that the hero didn't return her feelings. In "Family", Marinette describes her as calm but tough and always finds the solution to every problem being described as Marinette's everyday hero. 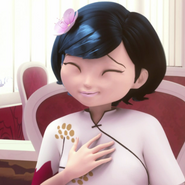 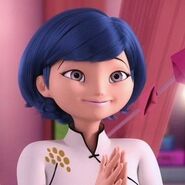 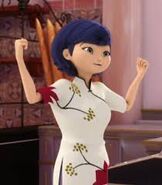 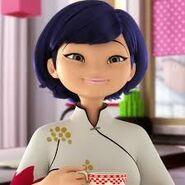 Add a photo to this gallery
Retrieved from "https://all-female-characters.fandom.com/wiki/Sabine_Cheng?oldid=5393"
Community content is available under CC-BY-SA unless otherwise noted.