Start a Wiki
Rose Lavillant is a student in Miss Bustier's class at Collège Françoise Dupont. She is also the lead singer of Kitty Section.

Rose is a sweet, cheerful and naive teenage girl.[8] With an optimistic and happy attitude, Rose cares for everyone around her, often showing much gratitude, and she likes helping them, offering snacks and drinks to her classmates during their movie project in "Horrificator". Her kindness can occasionally lead her to a downfall (as she is naive), though, such as in the episode "Timebreaker" when the title character tricks her into helping her stand up and thereby erases her from time. She is also very sensitive, easily becoming frightened to run for class representative after competitor Chloé threatens to kick her out of the scrapbooking club in "Darkblade". In "Befana", Rose can be very brave when standing up for her friends. Her courage is further shown in "Zombizou", in which she risks herself to save Chloé from the titular villain's minions. 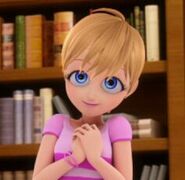 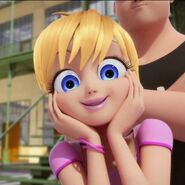 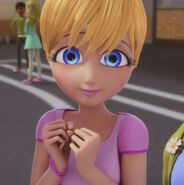 Add a photo to this gallery
Retrieved from "https://all-female-characters.fandom.com/wiki/Rose_Lavillant?oldid=5428"
Community content is available under CC-BY-SA unless otherwise noted.