Start a Wiki
Nadja Chamack (called Nadia Chamack in some episodes) is a TVi news reporter and Manon's mother.

Nadja is nice, informative, and interested in getting the details on an event to Paris. She gets impatient if she has to wait too long, and she sometimes goes too far in her quest for news, being insensitive with Armand when she tries to interview him after his loss at the election to André Bourgeois in "Darkblade". However, she is fearless in her quest to spread the word, even willing to interview the titular villain of "Pixelator" and calling herself the reporter who "spreads the villains' voice." Through all of her reports, she is professional and formal, but at the same time, she willingly expresses concern or happiness during particular instances. She is friendly to others, and she is very motherly to her daughter, though willing to discipline her. 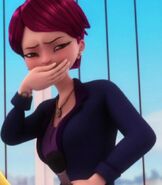 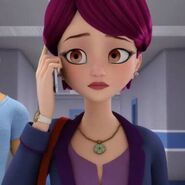 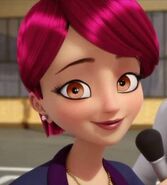 Add a photo to this gallery
Retrieved from "https://all-female-characters.fandom.com/wiki/Nadja_Chamack?oldid=5274"
Community content is available under CC-BY-SA unless otherwise noted.