Marinette Dupain-Cheng is the overall main protagonist in Miraculous Ladybug (being she is one of main titular protagonists, the other is Adrien Agreste/Cat Noir). She is the new Miraculous guardian. Her superheroine identity is Ladybug. Her best friend is Alya Césaire.

Marinette is a sweet, outgoing and joyful girl who loves fashion, her friends, family and Adrien Agreste (Marinette's crush) where Adrien describes her as honest, kind, fair and the type not to cheat. She is very helpful as she was willing to help those who have insecurities such as; Juleka Couffaine who thought she had a "class photo curse" and Marc Anciel who was too afraid to share his creative writing. According to Clara Nightingale, Marinette has a pure heart. She cares deeply for other people, usually putting their feelings and interests even before her own, in some cases at a personal cost. Despite being genuinely kind, she has her limits, such as when she gets irritated with Chloé Bourgeois to the point that she refuses to continue guarding her against the Evillustrator as Ladybug.

Despite her outgoing and empathetic personality, Marinette struggles with self-confidence and self-esteem. She used to be even more very nervous and didn't oppose others, but her confidence grew considerably since she became Ladybug. In a situation, she deems urgent, she becomes very nervous, clumsy, a bit awkward, and quick to panic. These situations include approaching her crush, trouble-choosing between her love interests, when in contact with a really big celebrity if she thinks others do greater success compared to herself or losing something that will expose her secret identity. Thanks to her confidence as Ladybug though, Marinette has gotten more calm and comfortable around Adrien as herself, as seen when she helps him get away from a swarm of fans and talks to him more fluently.

Marinette can act impulsively and irrationally at times, as shown when she tried to deflect the false accusation of "stealing" Chloé's bracelet onto others who are also innocent. She is willing to do several risky tasks in order to protect her image, like stealing Adrien's phone to erase an embarrassing message she accidentally left on it. She also expresses jealousy whenever other girls such as Chloé or Lila Rossi flirt with Adrien, sometimes causing her to act irrationally, even abusing her powers as Ladybug to keep them away or forget to destransform in the first place. However, Marinette tends to learn from her mistakes and become a more open-minded, understanding person. She also takes advice from others very well, whether it is family or friends as seen throughout the series. 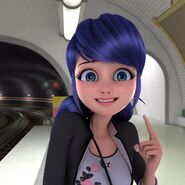 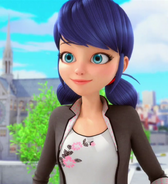 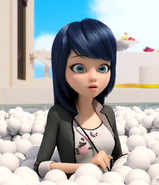 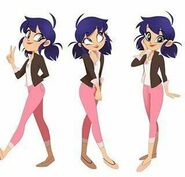 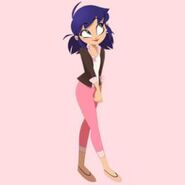 Add a photo to this gallery
Retrieved from "https://all-female-characters.fandom.com/wiki/Marinette_Dupain-Cheng?oldid=5281"
Community content is available under CC-BY-SA unless otherwise noted.