Lemon Zest is a female human and a student from Crystal Prep Academy. She is a member of Shadowbolts and one of secondary antagonists in Friendship Games, and she and her friends Sour Sweet, Sunny Flare and Sugarcoat return in Dance Magic as main antagonists turned supporting protagonists. Lemon Zest has a two daughters named: Tart Lemon and Zest Lime.

Lemon Zest demonstrates the behaviour of a wild, obnoxious rocker girl. She enjoys listening to loud music on her headphones and forces Twilight to listen to it at one point. Like most of Crystal Prep's students, Lemon Zest is fiercely competitive and obsessed with proving her school's superiority over Canterlot High School through any means necessary. Despite this, she happily socializes with Canterlot High's students during Pinkie Pie's party, and she later helps save several students from both schools when Midnight Sparkle's rampage puts them in danger.

In Equestria Girls New Generation: Lemon is also already a mother and still has contacts with her best friends: Sour Sweet, Sunny Flare, Indigo Zap, Sugarcoat and Sci-Tw (Twilight Sparkle) talking about their maternal life and having daughters, and of course besides knowing of daily news and gossip. Lemon worries a lot about his daughters mainly with Tart Lemon, in which he has a strong connection, Lemon also tries a better relationship with Zest Lime which is the most complicated, but the two always end up in an argument because of Zest's arrogance. 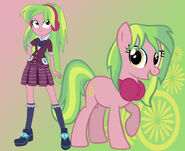 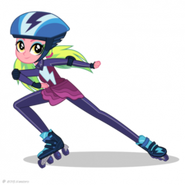 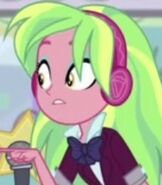 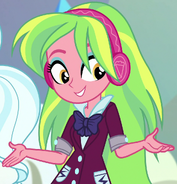 Add a photo to this gallery
Retrieved from "https://all-female-characters.fandom.com/wiki/Lemon_Zest?oldid=4652"
Community content is available under CC-BY-SA unless otherwise noted.