Ladybug is the superheroine identity of Marinette Dupain-Cheng. She is also the leader of the French Miraculous superhero team and the new Miraculous guardian (like her civilian identity).

As Ladybug, Marinette retains many of her alter ego's characteristics, but she is much stronger. Her confidence and bravery come out more prominently. According to Cat Noir, she can be stubborn at times, especially when she isn't easily convinced. While almost all of Ladybug's plans are effective, they tend to be complex and rather bizarre. She is more cautious and careful than Cat Noir, sometimes needing to restrain or stop him from doing hasty acts seen in several episodes. Only during rare occasions, she can act hasty, especially if she is in a rush to do something or multiple things at one time. She usually follows her head, saying that a great superhero always listens to her head, meaning that she isn't easily fooled or swayed by deceptions and lies.

As Ladybug, Marinette strives to rescue everyone, including those akumatized by Hawk Moth. She usually tries to persuade the supervillains to calm down and stop their rampage when she is able to do so. Ladybug is aware that there is a line between justice and revenge. She thinks that honesty and justice don't mean anything if you're pressured into doing it like as she didn't pressure Bob to tell the truth about him stealing everything from Kitty Section, but waited until he admitted everything himself across the TV. Ladybug acknowledges that good things come by doing good actions and that not all problems can be solved by wishing them away like Hawk Moth hopes, especially at the expense of hurting the innocent. She also values the lives of others more than material possessions.

Marinette takes her image and Miraculous powers as Ladybug very seriously. She has a more serious side when fighting against Hawk Moth's villains, as opposed to Cat Noir's laid back and goofy personality. She got angry at Chloé as Ladybug for using her powers to create a fake accident, which could have led to a serious one. Given these traits, Adrien claims that her civilian form is funnier than Ladybug. Marinette can be sensitive about her image, getting annoyed at Chloé playing her alter ego in Clara Nightingale’s music video, becoming a little angered when Nora doubted her abilities, or even attacking impulsively to Sabrina Raincomprix (as Miraculer) after the latter tauntingly mimicked her. Although she can get exasperated to Cat Noir if he jokes too much, she handles joking calmly at times and enjoys teasing him or others. Similar to Cat Noir, she is clever with her words and occasionally enjoys making puns.

While working with other Miraculous holders as team leader, Ladybug doesn't see them as sidekicks but as friends and extremely values their support and help. She is also great at giving advice to others when they need it. Thus, Ladybug is saddened that she has to suspend those who do a great job but at the cost of having their identities revealed to Hawk Moth like Chloé and Kagami, but she does it in a caring and considerate way letting them know she does it to protect them and their loved ones.

As her alter ego, Marinette strives to keep her personal and superhero lives separate to protect herself, the people she knows or is close to. Still, she aims to be honest with others in other ways, like her honesty with Cat Noir about not having romantic feelings for him and seeking advice from others. No matter the difficulty of her tasks, Marinette does everything in her power to set things right as Ladybug while keeping up with her everyday responsibilities, like studying, designing something, babysitting or working in the bakery. There are exceptions to the rule as well, such as when she mixed her duties to her former Master and her personal plans, like her letter to Adrien. She also has occasional problems at inventing excuses about her absences to her friends, teachers, and parents.

Despite enjoying being Ladybug as allowed her to meet Tikki and save people, Marinette admits that she is growing tired and stressed about keeping her lives separate and having to lie to everyone she loves, causing her to break down and cries to Luka about her problems. While on occasion, it is rare that she breaks down as Ladybug, she often voices her doubts and mistakes to Cat Noir during their hardest times. 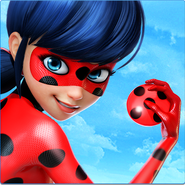 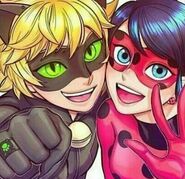 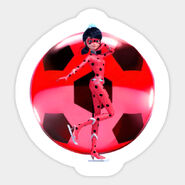 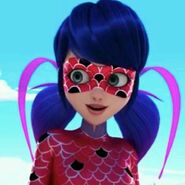 Add a photo to this gallery
Retrieved from "https://all-female-characters.fandom.com/wiki/Ladybug?oldid=5503"
Community content is available under CC-BY-SA unless otherwise noted.