Kagami is a fierce and thoughtful girl who is dedicated to accomplishing any commitment she makes. Likewise, she can be somewhat reluctant and quite stubborn, willing to go out and take risks regardless of what is at stake for her. However, she learns from her mistakes, knowing there are times she isn't the winner. Despite her wits, Kagami a bit of a habit of jumping to conclusions, as shown when she saw a picture of Adrien and Lila together quickly assuming she was the girl he told her about in "Frozer".

Kagami is an aggressive fencer that she will taunt her opponent during the fight. While she doesn't like to lose due to her competitive nature, she downplays her upset feelings and respects her rivals, not unlike Adrien. She can be quite emotive and rage-prone in spite of her composed exterior.

However, Kagami is a very hospitable person who ironically forms friendships with people after they both approach each other and solve their conflicts, suggesting an understanding side. She comes across as blunt and willing to speak her mind, telling Philippe that she didn't want to take skating lessons multiple times and even speaking for Adrien when asked. This is more evident when she advised Marinette Dupain-Cheng to stop hesitating.

However, she is also a little revealing as she told her mother in her akumatized form (and by extension to Hawk Moth) her identity. 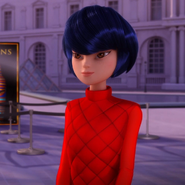 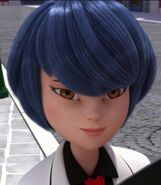 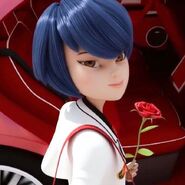 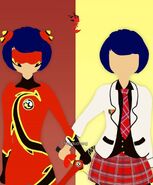 Add a photo to this gallery
Retrieved from "https://all-female-characters.fandom.com/wiki/Kagami_Tsurugi?oldid=6414"
Community content is available under CC-BY-SA unless otherwise noted.