Start a Wiki
Claudie Kanté is the conductor of Startrain and a recent astronaut. She is also the mother of Max Kanté.

Claudie is very enthusiastic both about her job and the possibility of becoming an astronaut. She can get very anxious when she is waiting for important news. Claudie is a very proud and sacrificing mother. She also treats Markov as a sentient being instead of a robot. 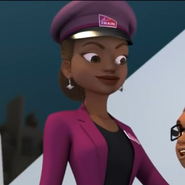 Add a photo to this gallery
Retrieved from "https://all-female-characters.fandom.com/wiki/Claudie_Kant%C3%A9?oldid=5520"
Community content is available under CC-BY-SA unless otherwise noted.