Start a Wiki
Clara Nightingale (called Laura Nightingale in some episodes) is a popular American musician introduced in the second season of Miraculous: Tales of Ladybug & Cat Noir.

Clara is a very energetic when talking with Alec Cataldi about her new music videos. She is constantly dancing to the tune while talking, and according to Marinette, she's very passionate about her music. Clara is clever; knowing she has to choose among many auditioners, she purposely trips to find someone who would act like Ladybug. 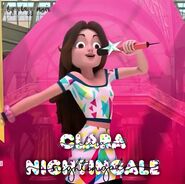 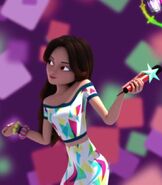 Add a photo to this gallery
Retrieved from "https://all-female-characters.fandom.com/wiki/Clara_Nightingale?oldid=5224"
Community content is available under CC-BY-SA unless otherwise noted.