Start a Wiki
Captain Hardrock is the akumatized villainess of Anarka Couffaine.

As Captain Hardrock, her desire for freedom increases to the point where she wants to blast her music across Paris and ruin the other concerts so that she’ll be the only one heard. When the passengers of her ship refuse to play music for her, she gets mad and imprisons them. She also doesn't consider herself as her kids' mom anymore and has no remorse in taking them prisoner when they refuse to obey her. 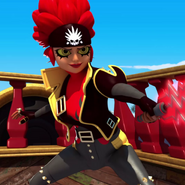 Add a photo to this gallery
Retrieved from "https://all-female-characters.fandom.com/wiki/Captain_Hardrock?oldid=5509"
Community content is available under CC-BY-SA unless otherwise noted.