Start a Wiki
Miss Caline Bustier is a teacher at Collège Françoise Dupont.

Caline is a pleasant, kind, helpful and instructive teacher. Even though she is kind to her students, she can be stern with them if they misbehave and she will send them to Mr. Damocles' office if she thinks it's necessary. When André Bourgeois is upset at her when Chloé Bourgeois loses her bracelet in "Rogercop", she is indignant at the rebellion. However, if a villain or another threat appears, Caline gets nervous, as seen when Rogercop questions her, and will suggest to her students that they leave if it becomes potentially dangerous, as seen in "Lady Wifi". Caline also has incredible willpower, being able to initially resist becoming infected by an akuma in "Zombizou", something not very many can do. 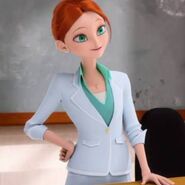 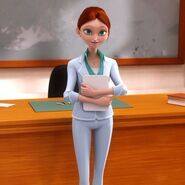 Add a photo to this gallery
Retrieved from "https://all-female-characters.fandom.com/wiki/Caline_Bustier?oldid=5221"
Community content is available under CC-BY-SA unless otherwise noted.