Start a Wiki
Bunnyx is the superheroine identity of Alix Kubdel.

As a grown up Bunnyx, Alix is still full of self-confidence as she believed she could defeat Timetagger on her own. And yet she is more humble admitting when she can't do things by herself, growing out being reckless. She is still tough and very determined as well as clever, seen when she left a clue for Ladybug and Cat Noir to find her in the past. She is pretty understanding with the powers she given and with that, she knows how to keep things secret in order to keep time catastrophes from happening. Due to her time based powers allowing her access a pocket dimension of any point in time, like Viperion, she too has learned to become cool, calm and observant. 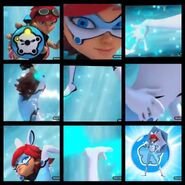 Add a photo to this gallery
Retrieved from "https://all-female-characters.fandom.com/wiki/Bunnyx?oldid=5420"
Community content is available under CC-BY-SA unless otherwise noted.