Start a Wiki
Aurore Beauréal is a student in Ms. Mendeleiev's class at Collège Françoise Dupont and a final contestant for KIDZ+ to become the weather forecaster.

Normally, Aurore is charming and prideful. Because of her arrogance, she is angry with Mireille for winning instead of her, but she keeps it to herself, only lamenting about it once she is alone. Over the series she's also been shown to be able to forgive people as she happily worked with Mireille as co-host for the Friendship Day event. She can also show appreciation to others, such as thanking Marinette for standing up for against Chloé. 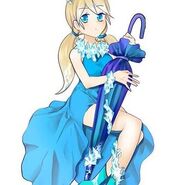 Add a photo to this gallery
Retrieved from "https://all-female-characters.fandom.com/wiki/Aurore_Beaur%C3%A9al?oldid=5219"
Community content is available under CC-BY-SA unless otherwise noted.