Start a Wiki
Audrey Bourgeois is the famous director of the fashion magazine, Style Queen. She is also the wife of André Bourgeois and the mother of Chloé Bourgeois.

Audrey is a bossy and demanding woman who only accepts what she wants and is "exceptional". She is considered to be "the harshest fashion critic in the world" and has no problem causing a fuss for those who do not meet her demands, such as having an issue with the red carpet being made out of fabric instead of marble. Like her daughter, Audrey has an fierce, explosive temper and will get upset over minor things, such as being denied a front row seat. She also will attempt to "fire" anyone who displeases her.

To an extent, Audrey seems to have little care for her family, or at least their opinions. She expects her husband to cater to her demands of firing anyone she dislikes. When she is akumatized, she does allow Chloé to assist her but fires her the moment she catches her helping Ladybug. However, this changes after Audrey learns how much she has in common with her daughter, deciding to spend more time in Paris with her. 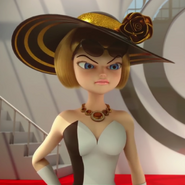 Add a photo to this gallery
Retrieved from "https://all-female-characters.fandom.com/wiki/Audrey_Bourgeois?oldid=5415"
Community content is available under CC-BY-SA unless otherwise noted.