Start a Wiki
Amelie Graham de Vanily is a character of Miraculous: Tales of Ladybug & Cat Noir. She is the twin sister of Emilie Agreste and the mother of Félix Graham de Vanily.

Amelie is outwardly positive and optimistic, showing a sensitive side and saying that family should be together in times of distress. However, this attitude is later revealed to be a facade, as when Félix reveals to her that he stole Gabriel's wedding ring, she is delighted rather than disappointed at her son's thievery. 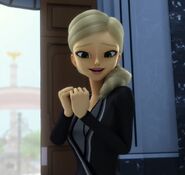 Add a photo to this gallery
Retrieved from "https://all-female-characters.fandom.com/wiki/Amelie_Graham_de_Vanily?oldid=5519"
Community content is available under CC-BY-SA unless otherwise noted.