Start a Wiki
Alix Kubdel is a character from Miraculous Ladybug.

Alix is a tomboy, tough, stubborn, reckless, and self-confident, she isn't afraid of challenges or saying what is on her mind. At the same time, she can be kind and grateful, like when her father gives her the family heirloom and when Ladybug fixes it after it breaks. She can become emotional and hold resentment toward others if someone goes wrong because of them, like with her watch. After the akuma is defeated, she realizes her own fault of not taking better care of the watch, and she tells Ladybug that she'll be more responsible with it.

Alix can be supportive and affectionate towards her friends as seen in "Zombizou", where she joined in on Rose and Juleka's group hug after Ladybug returned everything to normal, or in "Frightningale", where she praised Marinette for her giving up her chance to perform with Adrien and cheered for her when she rehearsed with him.

Alix is also helpful towards others as seen in "Reverser", where she sees Ladybug and Cat Noir's condition and insists on helping the heroes defeat the villain. She also gives Nathaniel some advice about Marc. 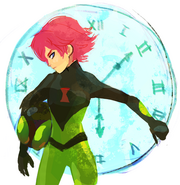 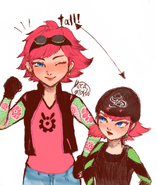 Add a photo to this gallery
Retrieved from "https://all-female-characters.fandom.com/wiki/Alix_Kubdel?oldid=5395"
Community content is available under CC-BY-SA unless otherwise noted.